What I Saw Inside A Trauma Ward in Kyiv

Thank you Phish and the entire Phish fan community for your support!  We are grateful for the donation we received from the Madison Square Garden to support our Ukraine response efforts and are humbled by your generosity.  We are also grateful for the opportunity to share a little more about Project HOPE and want to give you a glimpse into how we assess and then deploy the funds we receive from amazing donors like you.

In April, I visited Ukraine to see the devastation of Russia’s invasion first-hand. My organization, Project HOPE, has launched a comprehensive humanitarian response to this crisis: we have team members on the ground in Ukraine, Poland, Romania, and Moldova and are actively delivering medicines, medical supplies, mental health support, and other urgent assistance to Ukrainians in need.

But it wasn’t until I was able to see it myself that the level of devastation became real. In Kyiv, I visited two hospitals that had endured the horrors of the invasion. Many of the war wounded I met were injured weeks before but did not get proper treatment, either because hospitals were damaged, destroyed, or lacked capacity. Many wounds had developed infections and some had developed gangrene. Doctors had to amputate in some of the cases in order to save the patients.

The trauma ward was heartbreaking and showed the incredible resilience of the Ukrainian people. We visited many patients who suffered from bullet, shrapnel, and land-mine wounds. The doctors and nurses took their time explaining to us the injuries, the treatments, and how they managed to heal all those broken bones, damaged nerves, and other injuries with limited resources. They were so proud of what they could achieve with so little, and rightly so. The staff were doing everything in their power to save whatever they could.

Amazingly, the patients thanked us for visiting them. Some had kept the bullets or shrapnel that had been removed from their bodies. Others still had bullets inside them. The wounded were mostly civilians, including many women and elderly people. Two women in particular moved me: One had lost her leg when an artillery shell fell nearby, severing most of her leg at the thigh and killing three family members. “I’m lucky to be alive,” she told me.

The other woman was in her 60s and had been shot in the arm when she was walking with her hands up. The bullet went through her elbow and triceps, punctured her side, and lodged in her sternum. As she told us her story with tears in her eyes, I think she saw how we were moved. I was tearing up, even though I tried to hide it. She wiped her tears, thanked God and the doctors for her recovery, held my hand in her motherly way, and said proudly in English, “Thank you very much.” I wanted to hug her, but given all the equipment, all I could do was squeeze her hand and smile.

Shortly after, I went back to the doctor’s office. After I thanked him and commended him for the miraculous work he and his team were doing, I asked him, how do they do it? How do they cope with everything they have to deal with?

He began to tear up as he explained that on the first day of the war, the entire hospital staff showed up to the hospital by 10 a.m. without being called. They all stayed there 24/7, sleeping on the floor, couches, chairs, empty beds — wherever they could. They divided chores among themselves. They all stayed there together for more than a month, when the hospital asked them to go back home and look after their families. He said he had never been prouder of being Ukrainian.

As I returned to the empty hotel, I needed some time to process what I had seen. I walked through the empty streets of Podil, the oldest part of Kyiv. I needed to be reminded of Kyiv’s beauty after having seen the ugliness of war — an ugliness only matched by the incredible resilience of Ukraine’s health workers.

Project HOPE is committed to helping the Ukrainian people with health and humanitarian aid, both in Ukraine and in surrounding countries. In the first four months of our response, Project HOPE has delivered more than 300 pallets of badly needed medicines and medical supplies inside Ukraine, including trauma supplies, insulin, needles, hygiene kits, and more. Outside the country, our multi-country refugee response is helping refugees access the care they need, including children and those needing mental health care. To learn more about how you can help, visit projecthope.org/ukraine.

Rabih Torbay is President and CEO of Project HOPE, a global humanitarian organization based in Washington, D.C. 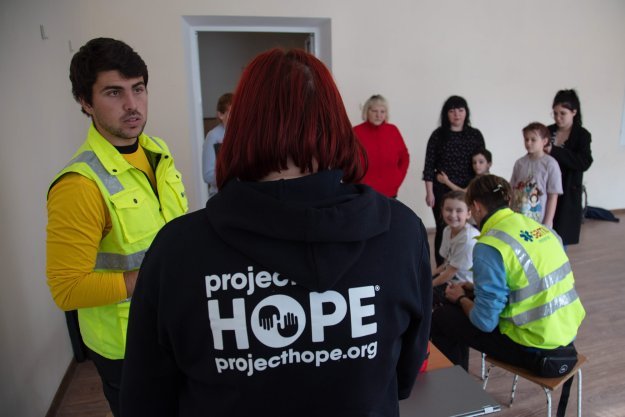 Miguel Lopez and Alvaro Grillo of the SAMU team work together with Inga, a Project HOPE translator, doing health assessments of Ukrainian refugee living at the Cojusna Refugee Settlement in Moldova. Photo by Jon Brack for Project HOPE, 2022. 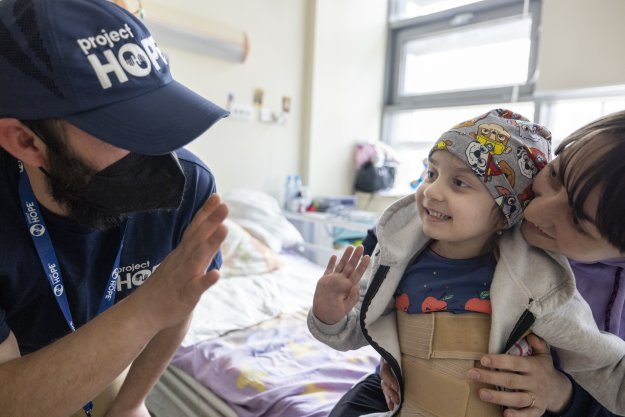 Mikhaila and her daughter Tamara, 5, a pediatric oncology patient at the University Children’s Hospital in Krakow. Mikhaila and Tamara fled the war in Ukraine and are seeking safety in Poland. Project HOPE has supported the University Children’s Hospital in Krakow for nearly 50 years, helping design and construct the hospital’s medical research facility, rehabilitation center, ambulatory care center, center for newborn care, and ICU for premature infants. In 2016, Dr. Kenyon noted that this was Project HOPE’s longest ongoing relationship with any hospital in the world. Photo by James Buck for Project HOPE, 2022. 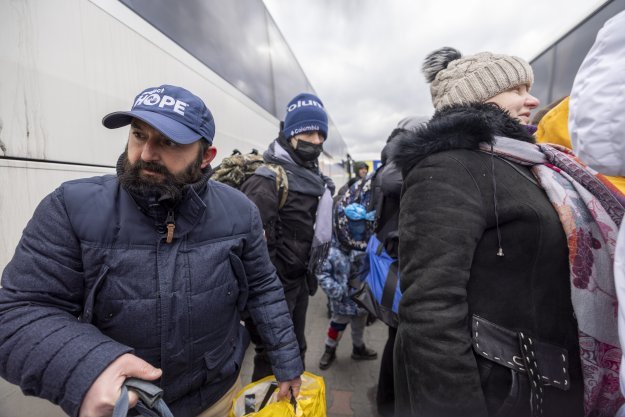 Vlatko Uzevski, Regional Manager for the Balkans, assisting Ukrainian refugees put their belongings on a bus at the Medyka border crossing in Poland. Refugees are staying in temporary settlements at the border crossing until they are relocated. Project HOPE is on the ground assessing health needs and working to establish transit routes to get medicines and medical supplies. Photo by James Buck for Project HOPE, 2022. 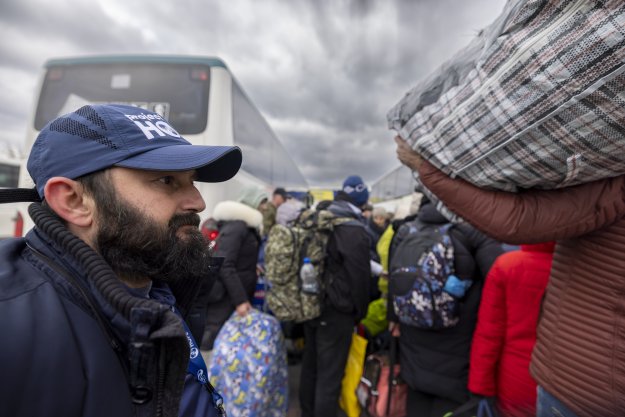 Vlatko Uzevski, Regional Manager for the Balkans, assists refugees with their belongings as they arrive and leave the temporary housing settlement at the Medyka border in Poland. Project HOPE is on the ground assessing health needs and working to establish transit routes to get medicines and medical supplies. Photo by James Buck for Project HOPE, 2022.