Events, WW in the News 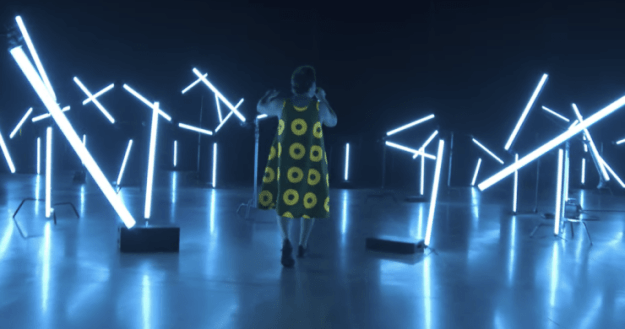 ‘Dinner and a Movie: LIVE from The Ninth Cube’

On New Year’s Eve 2021, for the second straight year, Phish and its fans gathered from afar in an attempt to make lemonade out of the latest batch of pandemic lemons with Dinner and a Movie: LIVE from The Ninth Cube, a livestream-only performance presented in partnership with Phish Radio and SiriusXM.

Last year, it was old shows and a virtual audience chess grudge rematch amid a months-long stretch of demoralizing uncertainty. It wasn’t much, but at the time it meant everything. After a full year without a tour—the last domestic Phish show had been New Year’s 2019 at MSG—spending New Year’s Eve “with” the band, in real-time, gave Phish fans a comforting reminder of what we’d been missing, what was waiting for us on the other side.

We got to that “other side” for a while in 2021, you could say. While COVID-19 continued to spread and new variants continued to emerge, we as a society adapted. Vaccines went into arms, safety protocols were fine-tuned, and Phish became one of the many large-scale acts to return to the road in full force. Summer tour. Fall tour. Halloween. Until the end of November, this was shaping up to be a remarkably “normal” year in Phish. But Omicron had other plans: lemons for Phishmas.

Even after a fantastic year of live Phish, the 2021 Madison Square Garden New Year’s run had the aura of a homecoming: when Phish was at the Garden playing “Auld Lang Syne” and dropping a truckload of balloons on our heads again once again, we would truly be back. The taste of COVID-19 returning for a new season at just the right moment to spoil the triumphant return was sour, indeed.

The replacement livestream New Year’s show, LIVE from The Ninth Cube, executive produced by SiriusXM’s Ari Fink and Matt Epstein and video-directed by Trey Kerr, was clear in its mission to repurpose those lemons. From the lemon-based dishes for dinner—like Trey Anastasio‘s necessarily on-the-nose recipe for a “Giant Bowl of Lemonade” (Step 1: Get handed lemons; Step 2: Make lemonade…)—to the gorgeous production quality of the stream, the Phish and SiriusXM teams managed to turn an abandoned concert date into a thoroughly impressive and immersive webcast event in a matter of days.

Inside the Cube, a full stage was outfitted with arena production and lights, manned in typically impressive fashion by Phish LD Chris Kuroda. In a serendipitous collaboration, Trey Anastasio solo lighting director Marc Janowitz handled the visuals for the “audience,” adorning the space in front of the stage with a forest of LED branches that seemed to expand upon the idea he started by planting lights in the seats during The Beacon Jams. In fact, the proceedings inside The Ninth Cube largely seemed to echo Anastasio’s crowd-less 2020 livestream residency at New York’s Beacon Theatre, from its practice room-like intimacy to the surreal silence that followed the ends of songs to the band’s subsequent riffing to fan comments making their way into the music.

While this was indeed a three-set performance, the band seemed to play down the New Year’s angle. There was no traditional “gag” to speak of, unless you count the frequent costume changes throughout the show (I can’t lie, that was fun). As midnight approached during an “Everything’s Right” jam, some simple, “cubed” countdown animation ticked away the final seconds of 2021. Phish dutifully wove into “Auld Lang Syne” before returning to the improv at hand. No balloons. Minimal fanfare. Understandingly bittersweet.

The “making lemonade” angle mostly won out over holiday customs in The Ninth Cube, which sleuthing fans have pinpointed as a rehearsal pod at Rock Lititz, the Amish country entertainment complex where Phish and countless other acts often hash out new productions before taking them on the road.

What fans got was a strong Phish performance that sounded crisp and creative, looked amazing, and truly helped soften yet another cosmic blow. Set One’s “Tube”, “46 Days”, and “Ghost” all had memorable moments, and who can complain about a first-frame “Slave To The Traffic Light”? The whole back half of set two was a wild ride, from the atypical, deep-funk “You Enjoy Myself” jam into “Frankie Says” to the surprise “Mercury” > “Possom” pivot.

In set three, after an extended “Twist”, Anastasio moved over to the drum kit and Jon Fishman—now wearing a green muumuu with yellow donuts—took the mic (and the vacuum) for a rendition of Syd Barrett chestnut “Baby Lemonade”, the first Phish performance of the song since 1992. The cover was followed by the customary “Hold Your Head Up” run-around, which saw Fishman venture out into the LED audience but felt undeniably strange without an actual crowd to rile up with his antics. A powerful “Harry Hood” served as the closer, one more flash of Phish brilliance to cap one more rollercoaster year.

Notably absent from The Ninth Cube on New Year’s Eve were songs from Kasvot Växt and Sci-Fi Soldier, the two sets of tunes that make up the complex “mythology” of the “Nine Cubes” for which the stream was named. Fans discussed, at great length, all the ways that Phish’s ever-growing “Nine Cubes” multi-verse might play into this New Year’s livestream and, of course, the whole thing went virtually unreferenced.

Perhaps the only homage to that saga, however indirect, was the surprising bust-out of “Time Turns Elastic” during set one. The multi-part Joy song has sat on the shelf since 2010, but this felt like a perfect night to dust it off. Time has shown us its elasticity these last few years—weeks warp into months, months into years, “I can’t wait for 2020 to be over” into “How is it already 2022?”

Now, remember what the time-traveling Sci-Fi Soldiers taught us about the Nine Cubes: “Each Cube is a window to a possible reality. At any given moment, time can be frozen and nine possible realities can be viewed.”

In The Ninth Cube, we froze time and viewed a snapshot of an alternate reality that felt all too real a year ago, a world in which concerts played to no fans were the only way that live music could live on. But while this year flew by, a lot has happened. We may be on the couch again, but the future looks much brighter this time around.

This was not the celebration Phish had planned, but that party is still on—at the World’s Most Famous Arena, in the City That Never Sleeps, in all its glory—just a couple months later than intended. This one was all lemonade, the 2021 version of Dinner and a Rematch, a band using the best possible means available to mark a special occasion and continue a beloved tradition with old friends. Cheers, gang. See you in April.